The Telecommunications Industry Association (TIA) introduced two performance standards; Category 6 (CAT6) and Category 6A (CAT6A). However, there is no CAT6e standard. This blog helps explain.

TIA’s CAT6 standard sets the bar for CAT6 cables and connectivity. The data transmission must perform above the TIA limit for up to 250MHz. The cable can extend up to 100 meters and transfer data at a maximum data rate of 1Gbps (1000-BASE-T).

Another version of the CAT6 standard is available; it is labeled as CAT6A and is considered an advancement of CAT6. TIA set the limit at 500MHz, which is double the CAT6 standard. The CAT6A cable can extend up to 100 meters and transfer data at a maximum data rate of 10Gbps (10GBASE-T).

CAT6e is not an actual standard. It has not been implemented or qualified by the TIA or any other reputable organization or commission. CAT6e is incomparable to CAT6 because the standard technically does not exist. A correct comparison would be between CAT6 and CAT6A. CAT6 is the original version, while CAT6A is the advanced version.

Although CAT6e is not technically a recognized standard, some manufacturers still manufacture products labeled with the CAT6e classification. For their purposes, CAT6e means CAT6 “enhanced”. It indicates enhancements of the original CAT6 specification that exceed the TIA limit. Typically, CAT6e claims to: double transmission frequency from 250MHz to 500MHz or even 550MHz; be equipped with a grounded foil shielding that helps data transmission reach up to 10 Gigabit Ethernet; and extend to a maximum length of 100 meters. 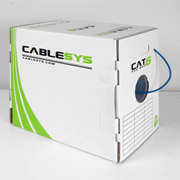 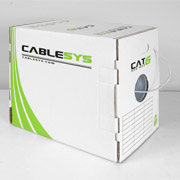 What are the differences between CAT5 and CAT6 cables?

What are the differences between CAT6A shielded STP, FTP, S/UTP, F/UTP and SFTP cable?